Golden Aura Explained: The aura is a layered emanation of energy which extends from the physical body through all other bodies.

The idea is how we have different bodies of different frequency of existence and manifestation within time.

This means all these bodies exist simultaneously but only the physical body is typically visible. For those who do see auras, there is light and energy around the layers of energies surrounding our physical bodies.

This is actually how we associate with more subtle forms of stimuli and information in our physical surroundings.

What does the golden aura mean?

A golden aura typically indicates one of two occurrences. Either the heart is opening up or there is compassionate energy flowing in.

Either way, deep compassion is involved, and golden light is typically associated with the Sun.

However, there are many other associations to be considered. A golden aura is one in a state of generosity and protection, bringing forth peace and sanity rather than the terrible opposite.

It represents full spiritual wealth and in most traditions is regarded as carrying a blessing from an enlightened deity or being.

When the aura is green or appears green to a reader, this generally means the person is in a state of healing and beginning to open or yield to the blooming of golden energy which is heliocentric and quite powerful.

The green glow before the gold holds in accordance with all symbolism on the Tree of Life.

Tiphareth is green with shining gold at the center, emanating through the green geometry of the heart.

The resulting aura light from the heart is a powerful and brilliant gold often associated with angelic forces or other beings of light.

It all depends largely on the frame of reference and the method of belief association. Mathematically, gold is equivalent to the energy of the sun in full reflection and this topic gets into strange physics but is valid.

This is why gold has been used for thousands of years to symbolically represent the sun and the highest aspect of compassion for all beings.

Hence, you see golden statues of Buddhas because nature is one of awakening and pervasive compassion with forgiveness for all misdeeds.

In Sanskrit, the heart chakra is called “Anahata,” which means “the untouched.” This is representative of the infinite compassion of the heart. 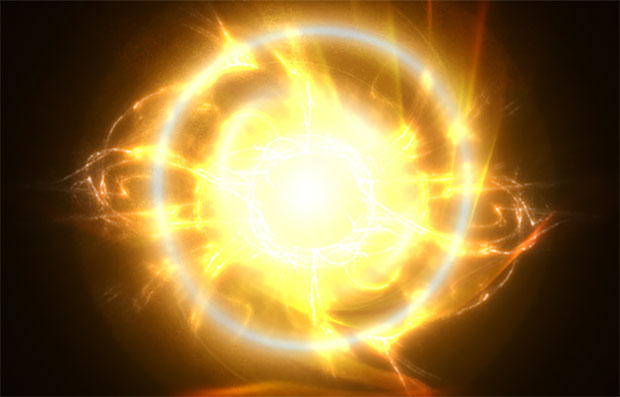 The heart does not judge. It does not struggle; it acts in accordance with change and flows with nature to continue life.

This is the vibration of the golden aura glow and why it is golden. This is a reflection of the wealth of compassion in our very souls extended through both light and mind to appear as a golden aura.

It does not mean that a being is enlightened or special because they extend a golden aura.

Most often, this is only a temporary energy within a being. However, when it persists, grows, and changes with the being themselves, it is likely you are dealing with one of a higher degree of spiritual evolution than most.

You are facing a being which is strong and forgiving, loving and gentle, while also having the ability to tap into the mind of eternity.

This is the real meaning of a persistent golden aura.