The first century Jewish historian Josephus believed there was a connection between the twelve stones in Aaron’s breastplate, the twelve months of the year, and the twelve signs of the zodiac.

Translations and interpretations of the passage in Exodus regarding the breastplate have varied widely, however, with Josephus himself giving two different lists for the twelve stones (Kunz argues that Josephus saw the breastplate of the Second Temple, not the one described in Exodus). St. Jerome, referencing Josephus, said the Foundation Stones of the New Jerusalem (Revelation 21:19–20) would be appropriate for Christians to use.

In the eighth and ninth century, religious treaties associating a particular stone with an apostle were written because the book of Revelation stated “their name would be inscribed on the Foundation Stones, and his virtue”.

Practice became to keep twelve stones and wear one a month. Wearing a single birthstone is only a few centuries old, although modern authorities differ on dates Kunz places the custom in eighteenth century Poland, while the Gemological Institute of America starts it in Germany in the 1560s.

Garnet, the birthstone of January, is mined in a rainbow of colors. From the fiery orange of Mandarin Garnet to the rich green of Tsavorite Garnet and to the most widely recognized color of Pyrope Garnet, it is considered a great gift to symbolize friendship and trust.

Geological information:
Garnets are a group of silicate minerals that have been used since the Bronze Age as gemstones and abrasives.
All species of garnets possess similar physical properties and crystal forms, but differ in chemical composition. The different species are pyrope, almandine, spessartine, grossular (varieties of which are hessonite or cinnamon-stone and tsavorite), uvarovite and andradite. The garnets make up two solid solution series: pyrope-almandine-spessartine and uvarovite-grossular-andradite.

Amethyst, the birthstone of February, is a variety of Quartz that carries a spectacular purple color that ranges from a blend of deep violet and red to a lighter lilac hue. Ancient Greeks believed that the stone protected the wearer from drunkenness and enabled them to keep a balanced mindset.
Geological information:
Amethyst is a violet variety of quartz often used in jewelry. The range of colour includes reddish-violet tints of pale or almost colourless shades, and deep, rich tones of pure violet.

Aquamarine, the birthstone of March, has a rich color and has long been a symbol of youth, health and hope. Its mesmerizing color ranges from pale to deep blue and are reminiscent of the sea. A perfect birthstone for March, the Aquamarine creates a beautiful accent to spring and summer wardrobes.
Geological information:
Aquamarine (from Latin: aqua marina, “water of the sea”) is a blue or cyan variety of beryl. It occurs at most localities which yield ordinary beryl. The gem-gravel placer deposits of Sri Lanka contain aquamarine. Clear yellow beryl, such as that occurring in Brazil, is sometimes called aquamarine chrysolite. The deep blue version of aquamarine is called maxixe. Maxixe is commonly found in the country of Madagascar. Its color fades to white when exposed to sunlight or is subjected to heat treatment, though the color returns with irradiation.
Formula: Be3Al2Si6O18
Colour:Blue
A variety of Beryl

Diamonds, the birthstone of April, are commonly associated with love which make it the perfect gift for a loved one. While white diamonds are most common, fancy colored diamonds can be found in various colors including yellow, blue, pink and a variety of others as well.

Geological information:
Diamond is a metastable allotrope of carbon, where the carbon atoms are arranged in a variation of the face-centered cubic crystal structure called a diamond lattice. Diamond is less stable than graphite, but the conversion rate from diamond to graphite is negligible at standard conditions. Diamond is renowned as a material with superlative physical qualities, most of which originate from the strong covalent bonding between its atoms. In particular, diamond has the highest hardness and thermal conductivity of any bulk material. Those properties determine the major industrial application of diamond in cutting and polishing tools and the scientific applications in diamond knives and diamond anvil cells.

Emerald, the birthstone of May, carries the rich green color of Spring and radiates a beautiful vivid tone. They are considered to be a symbol of rebirth and love. Emeralds are the rarest gemstones and are typically mined in Colombia, Brazil, Afghanistan and Zambia.

Geological information:
Emerald is a gemstone and a variety of the mineral beryl (Be3Al2(SiO3)6) colored green by trace amounts of chromium and sometimes vanadium. Beryl has a hardness of 7.5–8 on the Mohs scale. Most emeralds are highly included, so their toughness (resistance to breakage) is classified as generally poor. It is a cycosilicate.

June birthdays claim two birthstones; pearl and Alexandrite. Pearls have been wildly popular in jewelry for centuries because of their natural beauty. Alexandrite gemstones are extremely rare and desirable since they change color based on the lighting

Geological information:
The alexandrite variety of Chrysoberyl displays a color change (alexandrite effect) dependent upon the nature of ambient lighting. Alexandrite effect is the phenomenon of an observed color change from greenish to reddish with a change in source illumination. Alexandrite results from small scale replacement of aluminium by chromium ions in the crystal structure, which causes intense absorption of light over a narrow range of wavelengths in the yellow region (580 nm) of the visible light spectrum. Because human vision is more sensitive to light in the green spectrum and the red spectrum, alexandrite appears greenish in daylight where a full spectrum of visible light is present and reddish in incandescent light which emits less green and blue spectrum.
Formula:  BeAl2O4
Mohs scale hardness : 8.5 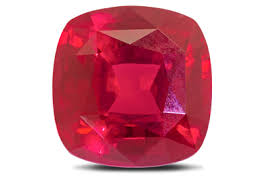 Rubies, the birthstone of July, are considered the king of gems and represent love, health and wisdom. It was believed wearing a fine red Ruby bestowed good fortune on its owner. A Ruby is the most valuable gemstone and its value increases based on its color and quality.

Geological information:
A ruby is a pink to blood-red colored gemstone, a variety of the mineral corundum (aluminium oxide). The red color is caused mainly by the presence of the element chromium. Its name comes from ruber, Latin for red. Other varieties of gem-quality corundum are called sapphires. Ruby is considered one of the four precious stones, together with sapphire, emerald and diamond.

Peridot, the birthstone of August, carries a lime green color and is one of only a few gemstones that exists in only one color. Peridot is believed to instill power and influence as well as bring the wearer magical powers and properties that protect against nightmares
Geological information:
Peridot is gem-quality olivine. Olivine is a silicate mineral with the formula of (Mg, Fe)2SiO4. As peridot is the magnesium-rich variety (forsterite) the formula approaches Mg2SiO4.

Sapphire, the birthstone of September, is most desired in its pure, rich blue color but is present in almost every color including pink, yellow and green. In the Middle Ages the gem was believed to protect those close to you from harm and also represented loyalty and trust
Geological information:
Sapphire is a typically blue gemstone variety of the mineral corundum, an aluminium oxide (α-Al2O3). Trace amounts of elements such as iron, titanium, chromium, copper, or magnesium can give corundum respectively blue, yellow, purple, orange, or green color. Chromium impurities in corundum yield pink or red tint, the latter being called ruby.
Formula: Al2O3
System: Trigonal
Hardness: 9 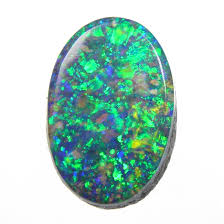 October also has two birthstones; Tourmaline and Opal. Tourmaline is a favorite gemstone for many because it’s available in a rainbow of beautiful colors. Opal gemstones are truly unique because each individual gem is adorned with a one-of-a-kind color combination

Geological information:
Tourmaline is a crystalline boron silicate mineral compounded with elements such as aluminium, iron, magnesium, sodium, lithium, or potassium. Tourmaline is classified as a semi-precious stone and the gemstone comes in a wide variety of colors.

Opal is a hydrated amorphous form of silica; its water content may range from 3 to 21% by weight, but is usually between 6 and 10%. Because of its amorphous character, it is classed as a mineraloid, unlike the other crystalline forms of silica, which are classed as minerals. It is deposited at a relatively low temperature and may occur in the fissures of almost any kind of rock, being most commonly found with limonite, sandstone, rhyolite, marl, and basalt. Opal is the national gemstone of Australia.

November birthdays is Topaz symbolizes love and affection, and is said to bestow strength and intelligence on the person who wears it, according to the Old Farmer’s Almanac, and a gift of blue topaz is said to be a promise of love and fidelity.

Geological information:
Topaz is a silicate mineral of aluminium and fluorine with the chemical formula Al2SiO4(F,OH)2. Topaz crystallizes in the orthorhombic system, and its crystals are mostly prismatic terminated by pyramidal and other faces.

December birthdays are; Zircon, and Turquoise. Each of these gemstones carries a unique blue tone making it a perfect birthstone for Minnesota’s frigid December winters. Zircon can be found in a variety of colors, but blue is the overwhelming favorite.

Geological information:
Zircon is a mineral belonging to the group of nesosilicates. Its chemical name is zirconium silicate and its corresponding chemical formula is ZrSiO4. The crystal structure of zircon is tetragonal crystal system. The natural color of zircon varies between colorless, yellow-golden, red, brown, blue, and green. Colorless specimens that show gem quality are a popular substitute for diamond and are also known as “Matura diamond”.

Turquoise is an opaque, blue-to-green mineral that is a hydrated phosphate of copper and aluminium, with the chemical formula CuAl6(PO4)4(OH)8·4H2O. It is rare and valuable in finer grades and has been prized as a gem and ornamental stone for thousands of years owing to its unique hue. In recent times, turquoise, like most other opaque gems, has been devalued by the introduction of treatments, imitations, and synthetics onto the market.