The twin flame surrender stage is one of those blissful and smooth periods. That is if you resist the urge to fight against it.

You earn this respite from doing all the inner work and overcoming the relationship turmoil you encounter.

You deserve the time to pamper yourself and restore your energy. This time with your partner is restorative.

It is a break in the weather, so to speak, allowing you to take care of yourself by ‘giving birth’ to that very authentic version of you.

You can feel that you are no longer under the strain of your own ego or even outdated patterns and behaviors.

You are allocated space to prepare for the unconditional love due to flood your life.

The realization that this is the next phase of the twin flame journey is exciting.

You surrender, not because it’s over but because it is going to continue in the most magnificent way.

You put the emotional confusion and baggage out with the trash, and now you are free to be as beautiful within your soul as you always knew was possible.

Your base and heart chakras have already been tuned, and you are free to prepare yourself for the process of receiving the first big frequency of love.

Twin Flames Have No Choice But To Surrender

Separated twin flames find that to continue on their journey towards union at a particular point; they have no choice but to surrender.

They can see it is time to stop fighting against the negative flow propelling them on.

Individual flames know instinctively that they must take the brunt of truth and be cool with it.

To be in a twin flame union you must be at a high level of human and spiritual understanding of your soul’s development and the reasons why you are here, now!

Twin flames hold in their hearts and souls the cosmic energy to transmute, transform, and transport souls to safety when called to do so.

Surrender to the process at this stage is so delicious and comfortable that you can not help but fall into it like a freshly made bed.

And why not? You have achieved so much with the inner work you worked so hard to complete that you deserve 5-star treatment as your reward.

And the biggest reason to accept the surrender to it all is that there is no other way to continue.

You need to rest, and you must recuperate; being refreshed and full of energy is vital for what is ahead.

You know you have reached a point of no return, and you understand there is no going backward into playing out old emotions and behaviors.

If you have been obsessing over your twin flame union, you start to chill and just allow it.

You Feel Lighter In Your Self

You no longer feel stressed about your twin flame union.

Instead, there is a release of pressure because you know you have progressed out of the war zone.

This welcome change of pace takes the weight off your shoulders and allows you to relax.

Your Visions Are Clear, And Your Emotions Are Calm

You can see the way forward, like the light at the end of the tunnel is finally visible.

This gives you great comfort on your journey and gives you hope when you feel like giving up.

When we can see our destination no matter how far off in the distance, it provides a tangible goal within reach. 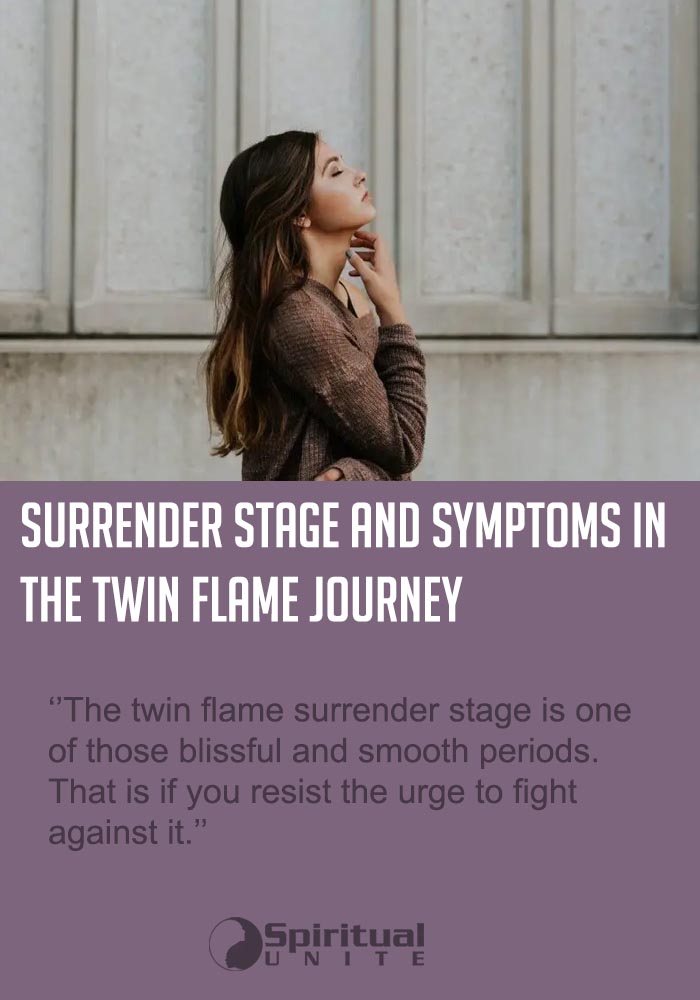 It seems very profound that you must allow yourself to be ready for something you have no control over.

It is wise to be prepared for the gift of time to regroup that you are about to receive.

The Universe miraculously provides this space for you, there is no effort required for allowing this function to occur.

Your twin flame will feel the change since you are both tuned into the same energy frequency that vibrates through both of your hearts.

What Are The 3 Main Twin Flame Surrender Symptoms

The first twin flame surrender symptom you may notice is the feeling you have of inner calm.

It sticks out like a sore toe because you are not used to feeling so relaxed and chilled out.

The Peace May Feel Weird

You will find yourself questioning your twin flame about this feeling.

It is easy to think that maybe what you feel is them giving up, as you are used to the chaotic dynamic that existed between you.

This relates to twin flames who are apart. We experience this feeling of peace together, and it is a surprising feeling when you have been through so much together.

Your instinct is to nest. You become pregnant with love, this makes you want to cook, organize your home, and groom yourself.

All these symptoms are natural when it comes to setting up a family unit, and twin flames are no different.

We have been planting food and flowers, recreating new energy within our home, and space for us to grow.

How Does A Twin Flame Chaser Surrender

It is the chaser who needs to surrender first, you are not admitting defeat, nor are you going to lose your twin flame.

If you are in the twin flame chaser, surrender comes to you when you feel your twin flame runner slow their speed.

The chaser needs to know the power lies here with them.  It is such a catch22 situation because one activates the other.

In order for the chaser to surrender they need to pull back on the chase and let the runner catch their breath.

We are so glad that we did this, it takes effort within your relationship, but we are happier than ever for it.

It makes sense that the runner will stop running if they are no longer being chased.

If you are the chaser it is because you somehow spooked your twin into taking off and running away.

This can be physical or emotional. For us, it is emotional when one of us is emotionally pulled away from the other if we felt chased.

If the chaser genuinely loves the runner they will stop the torment of the chasing.

The chilled vibe the runner feels from the chaser after they pull back makes all the difference in how long the surrender process takes to initiate and complete.

This change of energy gives the runner a chance to clear their head and come around to the idea of your infinite twin flame union.

Most runners say that it is at this point they feel surrendering is a natural and obvious next step for them.

How To Surrender To The Twin Flame Connection

Surrendering is the easiest thing to do. We do it without even thinking now. We go to each other and make it right as quickly as we can.

You just have to see that running and chasing is going nowhere and will continue on and on if you let fear get away from you.

Letting go of the fear of rejection, loss, and or loneliness, allows you to let go of the perceived notion that you must chase or run.

Fear feeds chaos and negative thoughts which turn into bad decisions and mismanaged interactions with your twin flame.

1.) You discovered that you can and have accepted the means to connect with your twin flame energetically, astrally, and even learn to use the telepathic connection between you. We can be in different rooms of our home and still know the other’s thoughts and timing regarding our physical life together.

2.) You understand now that you react without saying anything and that your twin flame will do the same. This unspoken part of our relationship is so pure. We always know what we did and how they feel; no words are needed. We just smile at each other and often have big loving hugs.

2.) No one twin is in control of the link and relationship, but surrendering distributes the power more equally between you. Power struggles between couples are real, and the surrender helps elimanate confusion and fights.

3.) Before the surrender, you felt that you were emotionally messed up and hurt.

But still, you wanted to repeat these same self-sabotaging actions as before.

4.) The peace of mind you gain with surrender is priceless and the bliss is delicious. And we are sure our neighbors prefer us making love and not war.

5.) You are not obsessed anymore with your twin relationship but much more active and engaged in your life together.

6.) You have found your strength again and learned that negativity only pops up from your own weaknesses and ego. We laugh now when we see either of us display old behavior. Maybe you can too.